Thank you to the 2,646 developers that responded to the survey that was conducted in January. We appreciate the time, feedback and the insights you provided us. This information will play a vital role in continuing to shape the Developer Program around your needs.

Below is an infographic of the results followed by a more detailed explanation of each section. Please give us your comments and thoughts below as well. We are considering running this survey twice a year due to the valuable information the developer community provided us. 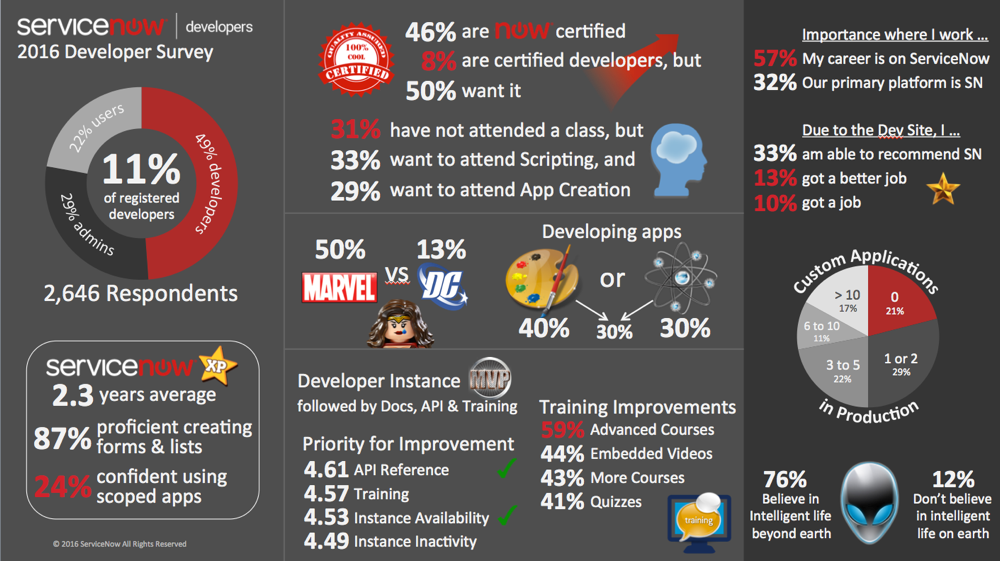 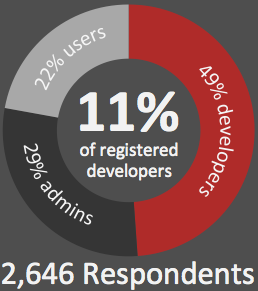 The 2,646 respondents to the survey represent 11% of the total number of registered developers in the program in mid January that was nearly 25,000 individuals. We really appreciate the incredible response rate and thank those of you that responded. Your participation and the data the survey generated is motivating and inspiring to the Developer Program team.

We asked five questions in order to understand the respondent’s development background, and along with insights on what training they completed, we were able to break down the respondents into the three groups: developers, admins and users. Based on feedback and emails we receive, this appears to be very representative of the current registered developer population. Although the program is designed for developers and technically savvy admins, we are happy that users from ServiceNow customers are leveraging the program to understand some of the base applications on the ServiceNow platform. 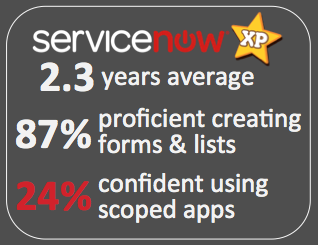 The survey asked a few questions on ServiceNow development experience and what elements of the platform the respondent felt comfortable doing.

We asked respondents what aspect of the platform they felt the comfortable or proficient, and to choose everything that applied. The provided options ranged from creating forms and lists that 87% of respondents felt comfortable doing to Orchestration and Performance Analytics where just above 10% of surveyed developers were proficient.

Only 31% of respondents haven’t taken some form of in-person or virtual training, but 33% want to attend the Scripting course, and 29% wanted to attend the Application Creation class provided by ServiceNow Education Services team. Scripting was the most desired course that respondents wanted to take.

Look for an upcoming promotion that will make taking in-person training and achieving certifications easier. 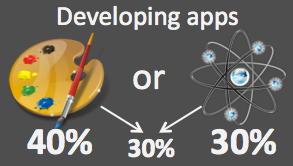 Between each section of the survey, we asked more lighthearted questions that made the survey easier to complete. Consequentially, these questions also provided us with some great insights about our developer community.

This question is one that I asked routinely while interviewing developers. Is developing applications an art or a science? The survey only provided the responses “Yes”, “No” and “Other” with the ability to write in your own response to “Other”. Interestingly, about 30% of the respondents wrote in with some form of both.

The answer to this question is subjective, and I was more interested in the rationale behind the answer verses the answer itself. Since I have a Computer Science Engineering degree, my education makes me lean towards a science, but my experience has led me to believe that it is also an art to make supportable applications that withstand the test of time. 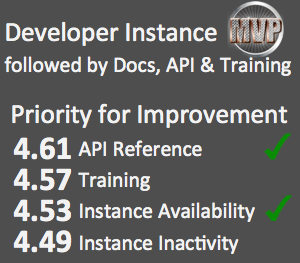 We asked what was the most important aspect or feature of the site. Not surprisingly, the highest ranked feature was the free Personal Developer Instance ranked 4.7 out of a possible 10. Developer documentation, training and the API reference all came in relatively tied at 3.6 to 3.7.

Training was the next highest priority for improvement followed by instance availability and inactivity time. The Platform Business Unit has invested in more instances assigned to the Developer Program that almost doubled capacity. There are now currently plenty of available instances on the Developers Site. 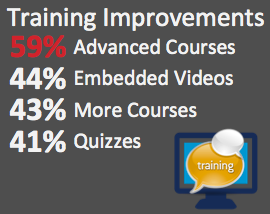 The survey dived into specifically how we could improve the current developer training on the site. Respondents were asked to pick their top three areas (which is why the percentages add up to over a 100%).

In our top band, 59% wanted to have more advanced courses than what is currently on the site. Once again, we have made progress on this feedback. We have courses on Orchestration and Performance Analytics that will be published to the site soon. We have Service Mapping and Discovery in plan for later in the year. With the Helsinki release, we will also be expanding our content on AngularJS and single page apps.

In the next highest band, the developer community wanted embedded videos, more courses in general and quizzes to validate they picked up the concepts. Look to see progress on these priorities throughout the year.

Our second lighthearted question revolved around the all-important preferred super hero universe: Marvel or DC. This question had additional answer options of “Other” and “What is a Super Hero Universe”, which explains why the two percentages do not add up to 100%.

Younger audiences tend to prefer Marvel characters, and older audiences lean towards DC, so this gives us an idea about who is in our developer community. With a number of respondents not knowing what a super hero universe was, it seems we have a fairly large number of international respondents.

Unfortunately the results are bad news for poor Wonder Woman who is weeping. Perhaps if we ask this question in the second half of the year after the Batman vs. Superman movie comes out, we might see a shift since most of the recent big movies are from the Marvel universe.

Developer Program Impact on My Company and Me 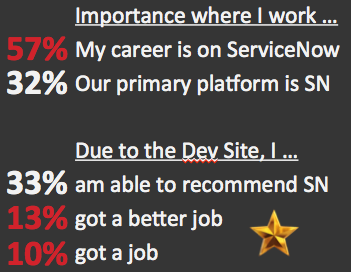 The survey then asked a series of questions on results of the platform and the Developer Site for the respondent and the respondent’s company.

Since the current developer ecosystem is comprised of customers and partners, having almost 90% of the respondent’s company’s primarily using the ServiceNow platform is expected. As we push the platform and program beyond the current ecosystem, this question becomes more interesting.

Another interesting piece of information for the program team was how the Developer Site helps the individual developer. The respondents had a wide range of possible answers, and they were given the option to select all that applied. 33% of the respondents reported they would recommend the platform based on the Developer Site, which is very encouraging for us. Even more inspiring is 13% indicated that they were able to get a better job and 10% actually got a job from using the Developers Site.

We are looking to spotlight some of these stories on the site and at developer events. We measure our success based on your success so it is really wonderful to hear about how we are making a difference in the developer community.

Number of Applications in Production 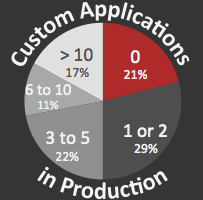 The primary objective of the Developer Program is to encourage folks to create applications on the ServiceNow Platform. With 50% of the respondents saying that they have 3 or more custom applications in production, we now have a baseline that we will attempt to increase over time.