Use Branches on Make a decision

First, the Make a decision logic has been improved to include a simple checkbox labeled Use Branches. This seemingly simple boolean field can be a huge time saver when it comes to repetitive tasks. The Make a decision logic uses a Decision Table to abstract the decision making logic from the flow, thus making your flow data-driven and enabling the capability to delegate the decision maintenance on a non-developer if you so choose.

OK, here’s an example of how I’ve done decision trees in the past. I passed the decision table my input and the definition included several branches. Most of the time, I was doing the same Update Record operation over and over with different values. 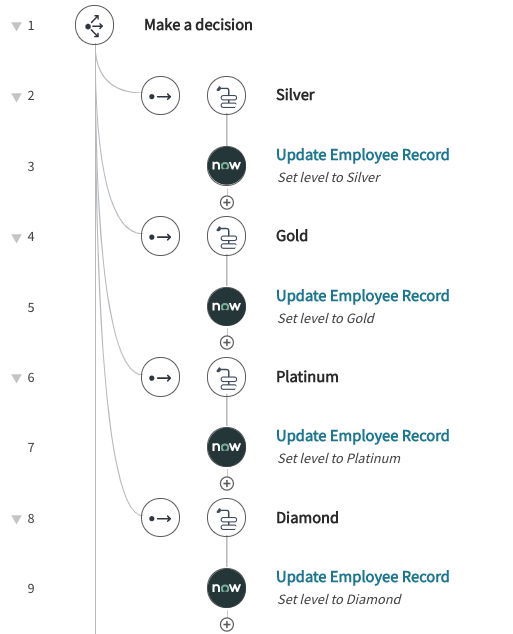 Spoiler alert: There’s a new Flow Designer feature in Paris on the action (next to comment and delete/trash) to duplicate the action and its parameters in a single click (a very fast copy/paste). That’s nice, but there’s still a better way if the actions in each branch are the same.

Uncheck the Use Branches box and the tree structure disappears. Fair warning, all the actions in the branches are deleted and cannot be restored - they must be rebuilt. Now the fun part! Notice in the data panel to the right that the Make a decision block has a couple data pills. Let’s go back to my example where I had four branches doing the same thing. Now I can put a single Update Record right after the Make a Decision and use the data pills to populate the record!

I invite you to look for opportunities to use Make a decision and uncheck Use Branches in your Flows.

The second thing I’m excited about is in the Action Designer - deleting and updating multiple records with a pre-built step. The Update Multiple Records step and Delete Multiple Records step are based on the same GlideRecord JavaScript API. The steps allow you to identify a table, filter conditions, and field values (for update only). And just like a typical script, you can optionally update system fields (updated by, updated on, created by, created on, and updates) and enable/disable business rules and workflows. I’m looking forward to using these to simplify my building and maintenance - I’ve built scripted versions of these in the past and it’s nice to see common functionality like this standard with the Action Designer now.