We are experimenting with new training content delivery methods. This tutorial blog post is one of those experiments. We are very interested in your feedback. Please let us know what you think about this format and the content in the comments below.

I will admit that for most scripts I need to run on an instance these days, I prefer other ways to execute my scripts over Scripts - Background. Syntax highlighting and checking are just too helpful for me to pass up if I have access to them. The value of Scripts - Background lies in its simplicity. No need to create a record. Just write or paste in a script and run it.

NOTE: Scripts - Background should be used very carefully and only in non-production environments. Free-form JavaScript can negatively impact data and system performance. 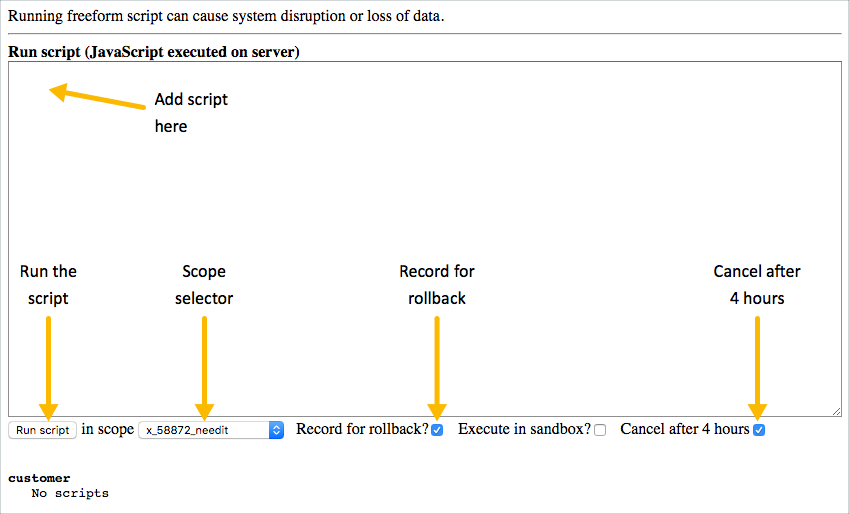 After the script executes, examine the results.

DEVELOPER TIP: If the script does not execute as expected and you need to adjust the script and run it again, click the browser’s back button to return to the Scripts - Background window with the script you ran.

In this section of the tutorial, you run a script in Scripts - Background to create some sample user records.

If the Record for rollback? option is selected, the database actions performed by the script can be rolled back.

To open the history after navigating away from the results, use the Application Navigator to open Rollback & Recovery > Script Execution History. Open the script execution to rollback and click the Rollback Script Execution… Related Link. Confirm the rollback.

NOTE: Script Execution History is only stored for seven days. After that, the execution history is no longer available to view or roll back.

Did you do the hands-on exercise in this blog? Click here to let us know!

If you have taken training on the Developer Portal, you should have the NeedIt application and table. Use what you have learned about Scripts - Background here to create some new NeedIt records. Log details for the records created. If you do not yet have NeedIt, use the instructions in Exercise: Prepare Instance for Client-side Scripting to configure your instance with the NeedIt application.

On the downside: rollback is not available for these script types. Regardless of how you execute a script on the ServiceNow platform, proceed with caution.

Here is a possible answer for the Challenge. It needs to be run in scope x_58872_needit.