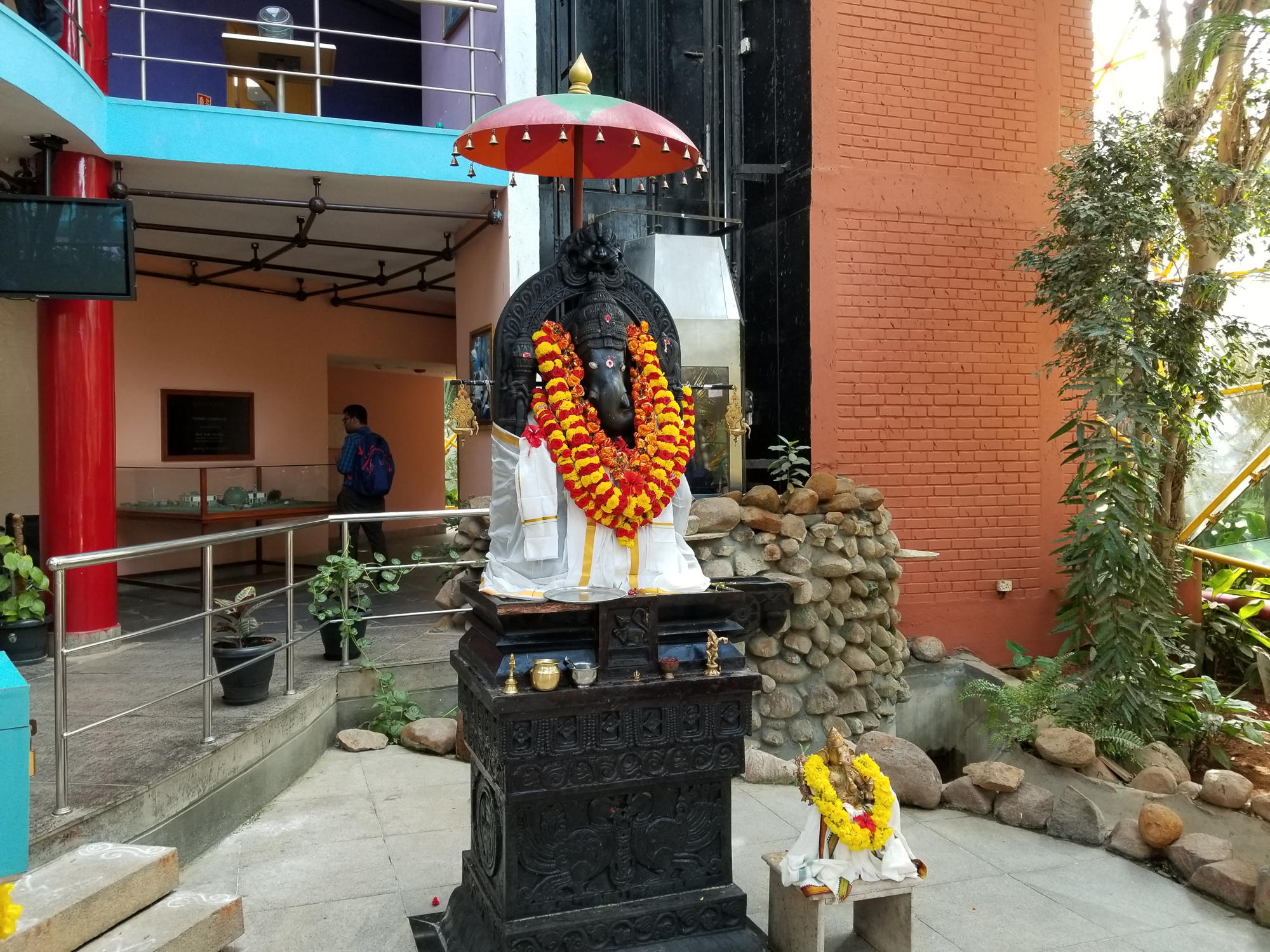 The ServiceNow Developer Advocacy team just completed a lovely and extended visit to India. India has the most significant number of ServiceNow developers outside of the United States of America. Having so many developers makes it a pivotal place to visit to engage, empower, inspire, and listen to developers. The key events were developer meetups and all-day workshops at multiple locations. Dave Slusher - an experienced hand at India trips - and Andrew Barnes traveled from the east coast of the USA. Local ServiceNow personnel were crucial for making these events successful. Notable was Sanuj Sugunan, who acted as the coordinator extraordinaire and was alongside our team nearly all the time.

The trip started before any flights. Forms had to be filled, visas acquired, and quite a bit of planning. In addition to legal paperwork preparations, several vaccinations and medications were required for Andrew’s first visit to the region. Due to a British Airlines pilot strike, the carefully planned travel was thrown aside. Instead of arriving on Wed Sep 11th, we were forced to travel earlier. Departure began Friday from North Carolina for Andrew, Saturday for Dave. After an 8 hour flight to London we had an 11+ hour flight to Hyderabad. Andrew arrived for good on Sunday and Dave on Monday.

Having arrived a few days earlier than planned, there was some time to visit the Hyderabad office before the event obligations. The new Hyderabad office was quite lovely. Getting to spend time with the engineers and product management folks located in IDC was awesome. When you usually are ten and a half hours time shifted, free-flowing collaboration is difficult. 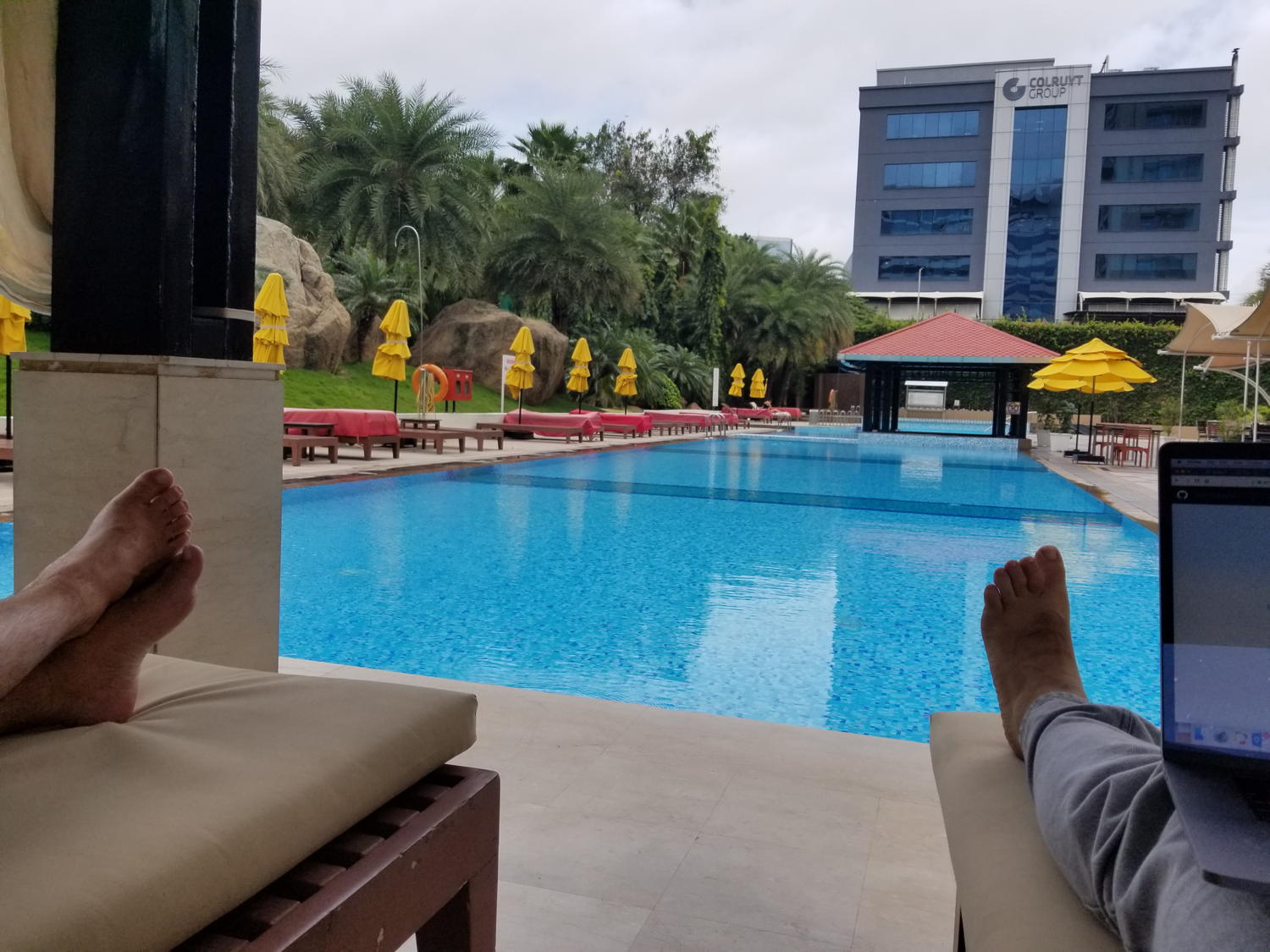 Once we entered the preparation phase, we decided to change the mobile lab from Madrid to New York to improve the student experience. We spent the next two days adapting and adjusting an existing lab. It wasn’t the easiest way to bring about the lab but we wanted to make sure the students got more valuable insight into developing for the mobile app. The dramatic changes from Madrid to New York made that a necessity. Luckily, we had a chance to work at our remote office by the Westin pool.

Wednesday brought a surprise visit to KL University in Vijayawada. The University has been partnering with ServiceNow to train and certify students on ServiceNow. The University personnel and students were very welcoming. We were able to see some of their projects provide feedback to the applications the students had been creating. We also spent some time talking to the department chair about how to further incorporate ServiceNow into the curriculum. 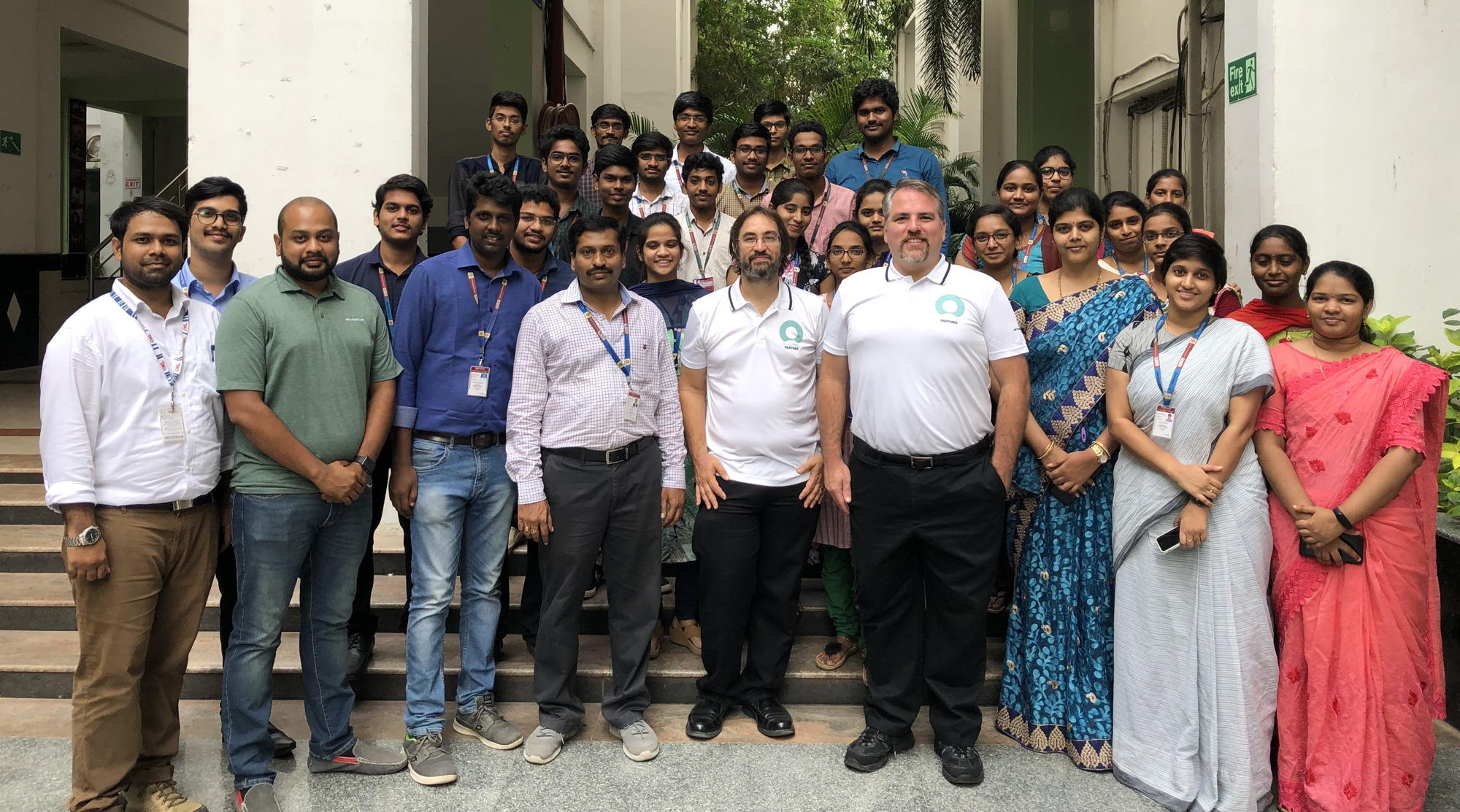 We were both very impressed with the passion and ambitious projects the students were showing after only a month. We showed off some new features to the students, as well as some of the applications we built. Our friend and coworker Sanuj did a lovely job working with KLU and empowering the students and faculty there.

Thursday night was the first planned event of the trip. The Hyderabad meetup group had an event in the new ServiceNow office. Around 60 awesome developers were able to attend despite the extensive traffic caused by the end of the Ganesh Chaturthi celebration. Spending time with developers is the most fulfilling part of our job. Instead of just talking about New York features, we decided to show them in an instance directly. The developers were quite excited about the developer-centric features. Next, we broke up into groups to discuss four different topics. Each group shared their thoughts on the issue at hand, and then we reformed into the larger group. Each group provided a summary of their chat to the larger group.

Friday morning we held the first of the Developer Days workshops. The event started with a keynote talk by Proveen Damodaran then a short demo of future developer tooling and New York improvements. With the keynote done, it was time to get the attendees’ fingers on their keyboards. The three hands-on workshops focused on giving the developers knowledge and some familiarity with newer capabilities. Flow Designer, IntegrationHub, Mobile Studio, Predictive Intelligence, and Virtual Agent were all covered in the workshops. The attendees created integrations and focused on building and delivering great experiences.

Saturday Dave and Andrew split up to cover two different developer meetups - Pune and Mumbai. Both of these meetups set record attendance for their respective groups. Most importantly we were able to engage and share our passion for ServiceNow with our developers passions. 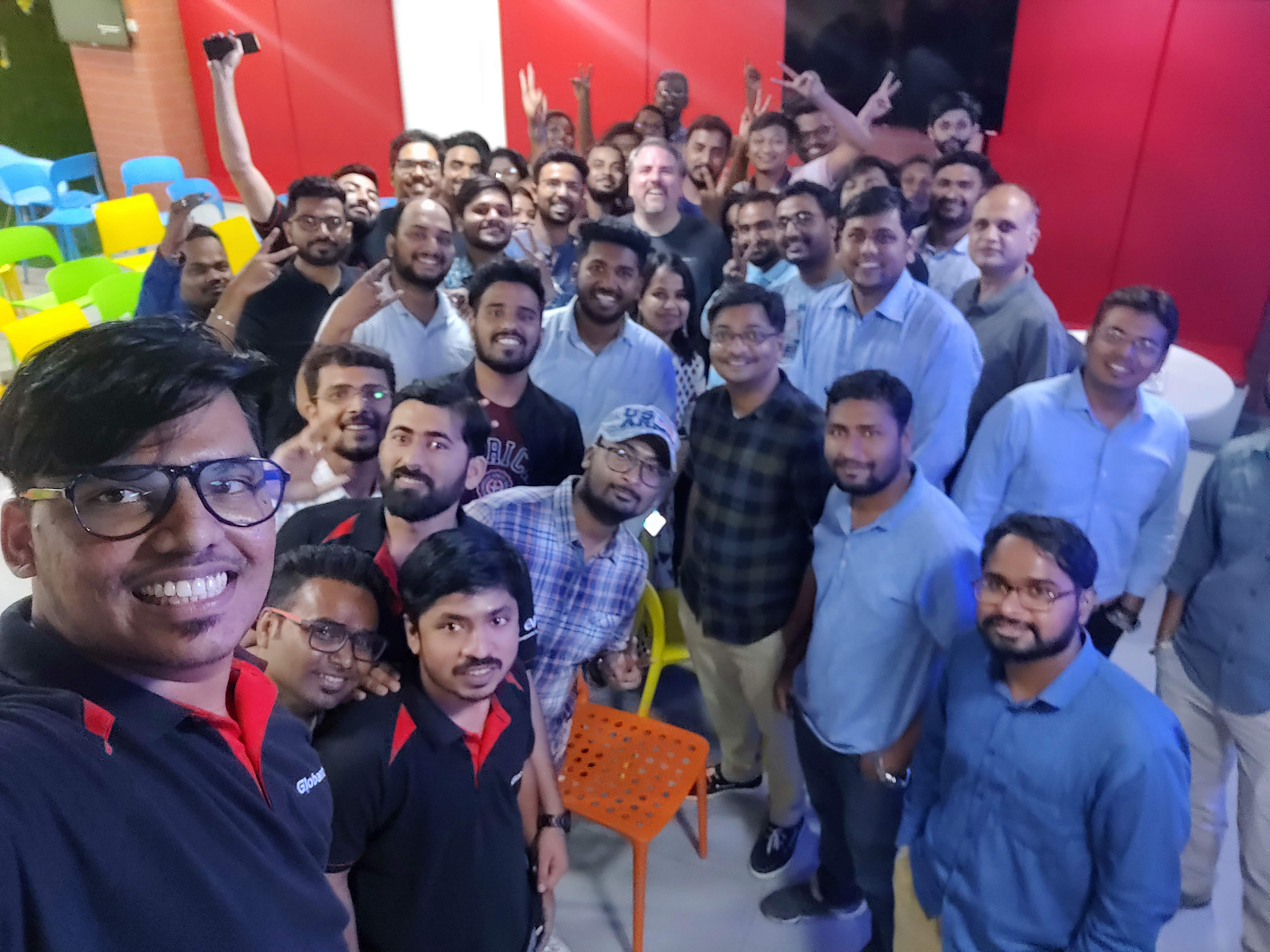 At the Pune meetup, the crowd of more than one hundred was engaged and thoughtful. We talked about upgrades, update sets, new capabilities, managing development teams and much more. At the Mumbai meetup, Dave presented about NY and a member of the group presented on OAuth and how to use credentials in REST Messages. The presentation was great, useful and exactly what we like to see from meetup groups.

After the meetups, we traveled to Bengaluru. On Monday we hosted another public Developer Day event in the ServiceNow office at the Golf Links site. Aditya Ramamurthy gave the keynote address for this session and did a great job. We had a room full to capacity with engaged students. We did the whole day session immediately followed by the Bengaluru developer meetup. After this busy and long day, we drove across town to Electronic City for the rest of the week. 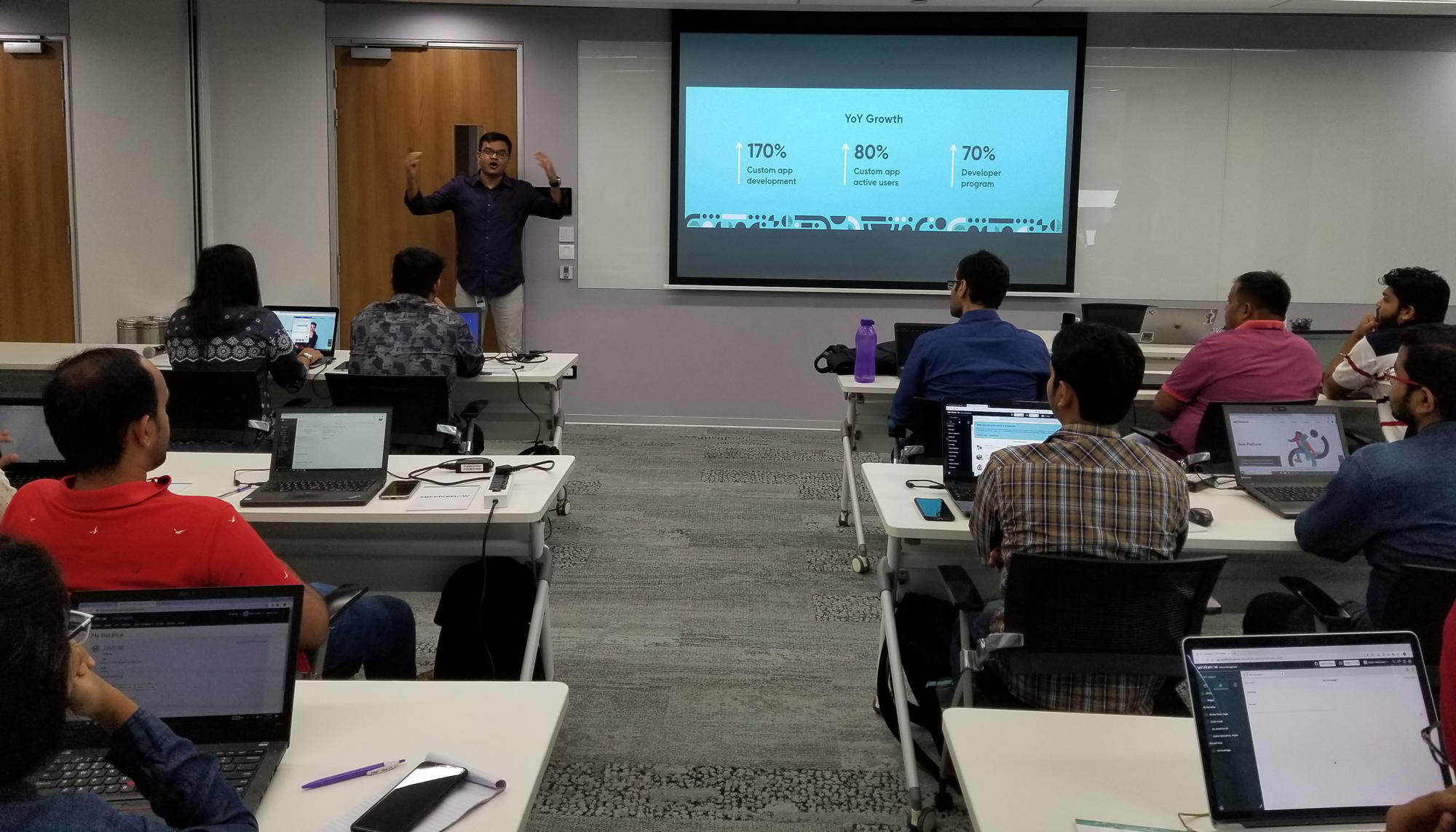 For the next three days we repeated the process at partner locations in the area for events arranged by Shashin Rastogi. It was a relief that the first of the three days was close enough to walk to the location. Bengaluru traffic can be intense so a 5 minute walk to the destination is a treat. Over the course of those three days we taught several hundred students in the room with us and many hundreds more at remote sites via video conference. Great thanks to the ServiceNow employees who traveled to these locations so that even remote students had a lab guru in the room with them. We heard positive comments about that so hopefully all the students got a good experience, regardless of their physical location. 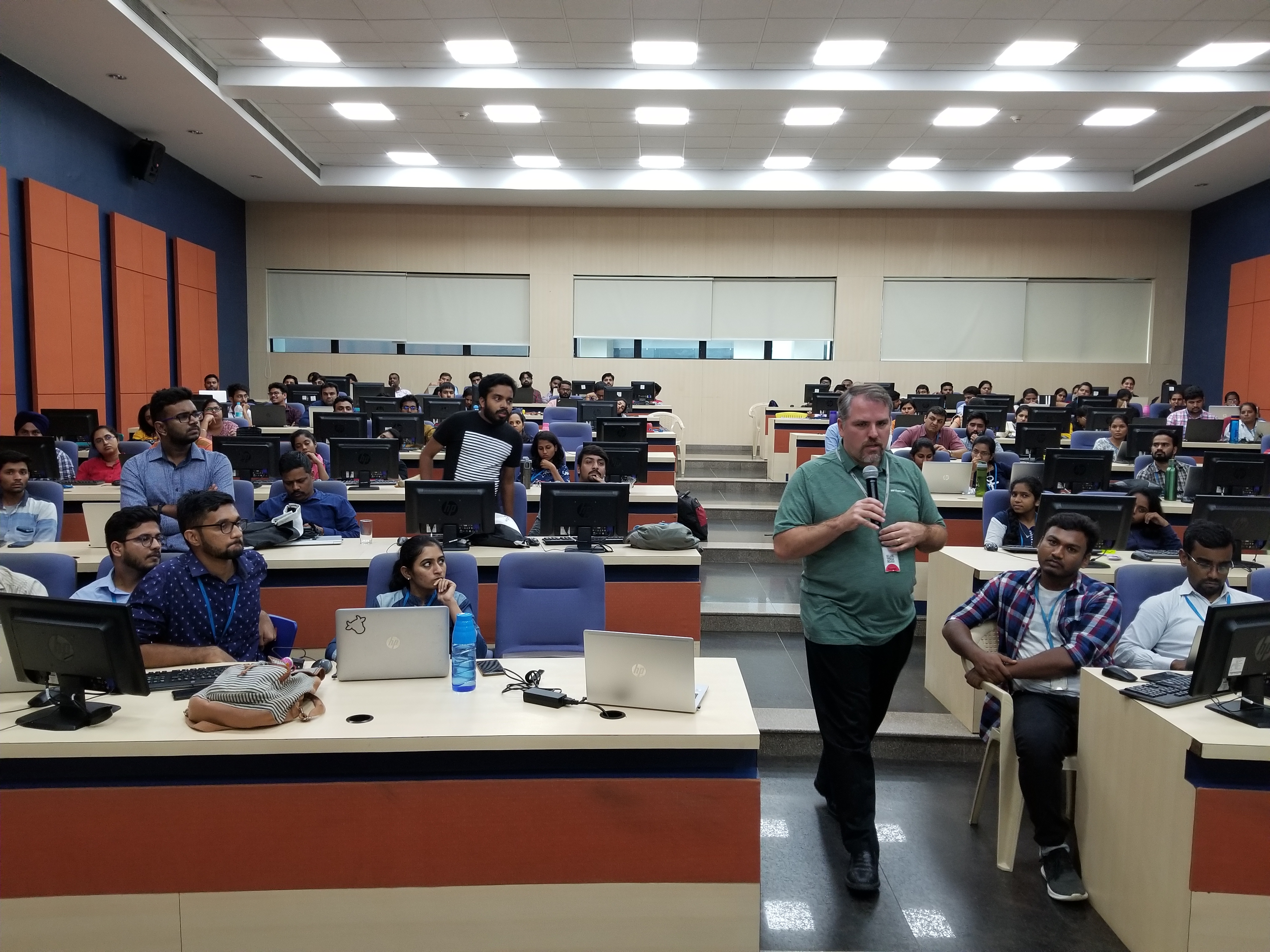 After the last of the three partner events, Andrew and Dave had a quiet celebratory dinner at the 46 Ounces brewgarden near the hotel. We had presented 5 all-day workshops and attended 4 developer meetups over the nearly two week trip. By the end, we were pleased with the results but also exhausted. Off we went for our 24-36 hour journeys home, thankfully without incident or work stoppage.

Andrew: Being my first trip to India, I want to thank the people who we met and who helped us have a great experience. Everyone along the way went out of their way to be kind and helpful. The passion our developers in India have is a sight to be seen in person. Thank you for having me, and allowing me to engage with you India ServiceNow Developers! Til next time <3.

Dave: It was a delight to return to India. I have had a wonderful time each trip and this was no exception. The passion and excitement of the developers keeps us going through the long days of preparation, teaching and travel. I appreciate all of the hospitality and engagement of everyone we met. When in doubt, bring me upma! Dhanyavaad! 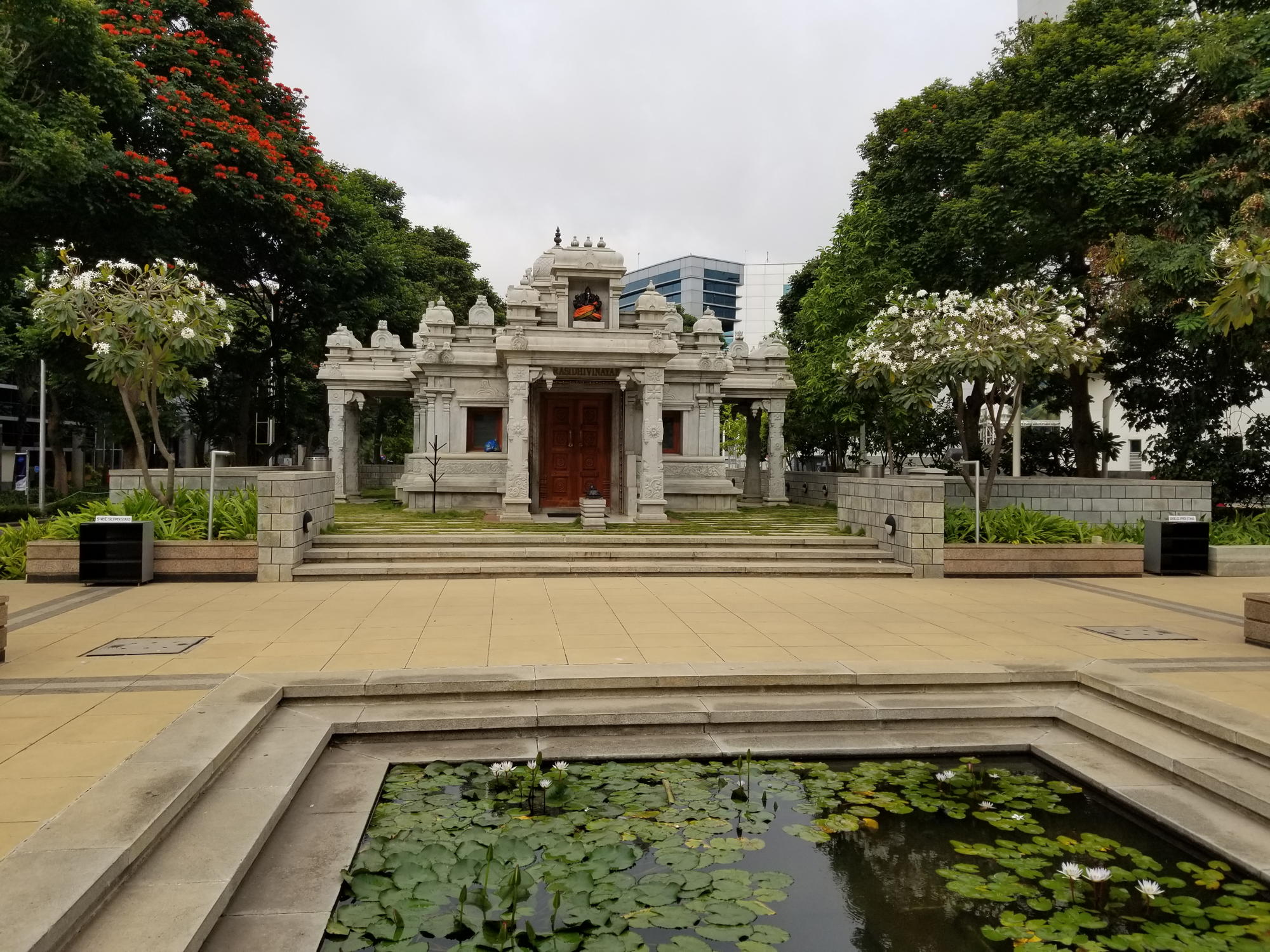