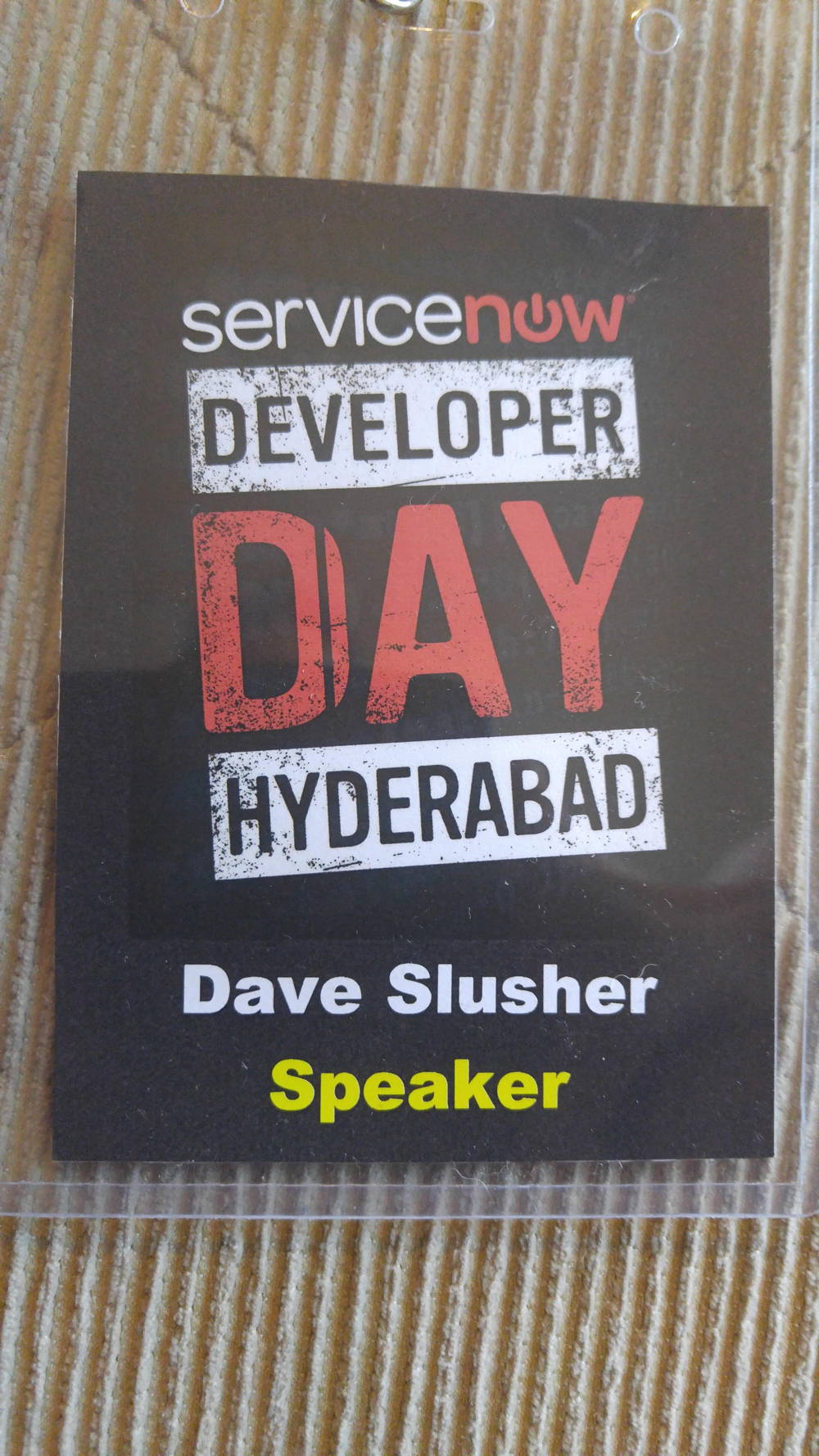 The ServiceNow Developer Program recently went on the road in the form of a road trip to India. This will be a bit of a departure for blog posts here in the form of a trip report. We will return you to your regular diet of nerdy technical posts shortly.

India is an important market for the Developer Program. By any metric you choose to examine, it is always the second largest demographic behind the USA. In order to serve our colleagues there, four events were arranged in India. We had a full day program called Developer Day, followed by an evening meetup in the format of our standard Developer meetups afterwards. This structure was performed on March 7th in Hyderabad and then repeated March 9th in Bengaluru. Organizing the event and traveling from the USA offices to staff the event were Rao Surapaneni, Senior Director of Application Development (Store & Developers) and Jack Nguy , Senior Manager of Development for the Developers Program. Going to represent the Evangelism arm of the Developer Program was me, Dave Slusher. It should also be noted that Lily Li, the marketing genius of the Developer Program also did a large portion of the organization stateside. 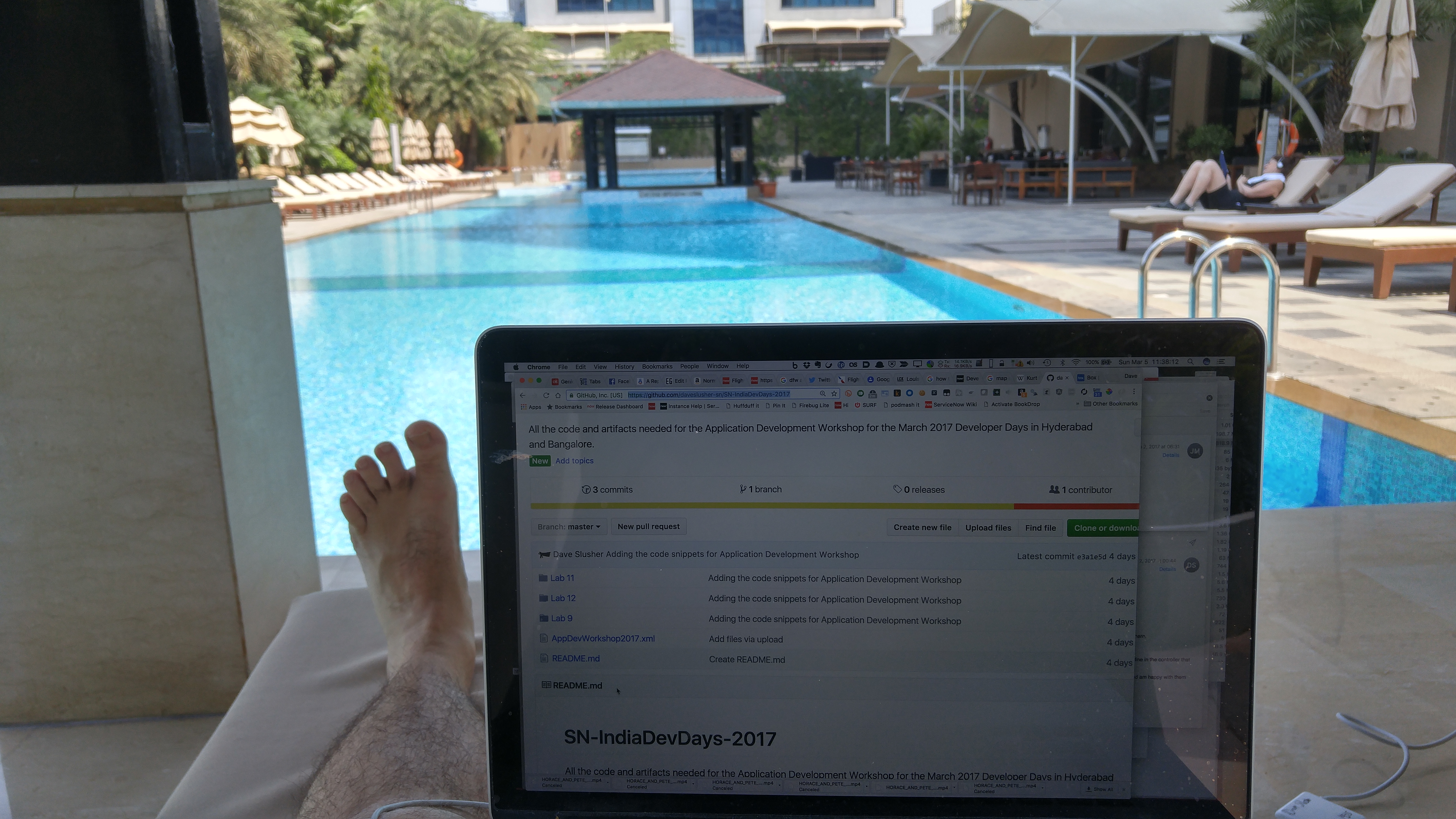 In order to get into the country with a safety margin and have plenty of time to acclimate to a timezone 10.5 hours from my native one (13.5 for Jack and Rao) it was recommended we arrive Sunday. This required me to fly out of Myrtle Beach Friday afternoon. Further complicating life, I had to make a family hospital visit to Augusta GA the day before. That made the travel itinerary consist of:

- A short flight to Charlotte NC followed by a short layover

- A long flight to London Heathrow followed by a long layover

All in all, I began at 10 AM Eastern time Friday and arrived at the hotel in Hyderabad at 9 AM India Standard Time on Sunday. This is where the decision to get some time in an executive lounge in Heathrow turned out to be a good one. I spent B#20 to take a shower there and it was the best money I have ever spent.

In Heathrow I met up with Jack and from there the two of us began a long week of being work and travel partners. Once in the hotel with some food and rest behind us, we began to work on our materials for the meetings. I suggested that we annex the hotel pool as our branch offices. With a few Type D plug adapters and convenient outlets we spent some hours beside an Infinity pool making some adjustments to our slides, working on the demos that we would present and smoothing over the experience. Jack was tasked with delivering the Istanbul Dev Tools talk and demo, which mostly consisted of showing the Automated Testing Framework and the Javascript Debugger. I was in charge of leading an Application Development Workshop that comprised the bulk of the daytime sessions, as well as a more in depth examination and demo of Service Portal and some custom widgets. 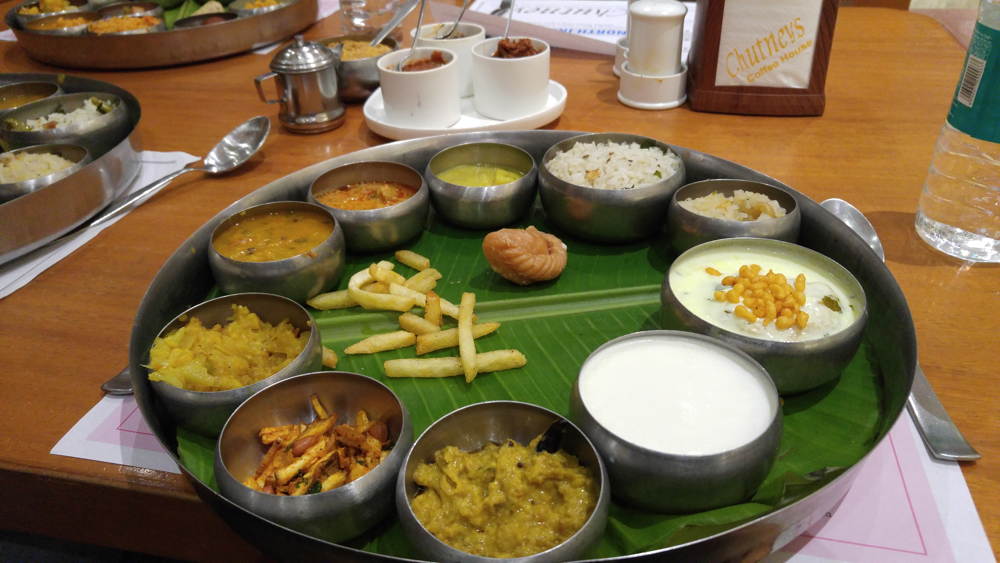 At one point, I decided to go over to the swim up bar in the hotel pool. There was a big rowdy crowd of mostly Americans who turned out to be mostly expatriates that all work for the same big accounting and consulting firm. You’ve heard of it. Being the party crasher I am, before I knew it I had spent most of the afternoon with them. After the first of many meals of traditional Indian fare we went to bed early and prepared for the next day.

On Monday we went into the Hyderabad office, where we worked more getting ready for the event and meeting with the team that would staff the event. It was mostly Saraja Panda and his team, the SN Store Certification group. Damu Reddy, Nagarani Racharla, Arvind Khot, and Saurav Sarkar were the people acting as lab TAs for the event. Also worth noting are Aditya Ramamurthy who organized the spaces and Saishankar Gududuri who was the logistics and registration person (and who did an incredible job of making it smooth.)

After a full day in the office, we ended up doing what would turn to be our only real tourist activities of the whole week. We walked across the street to a shopping mall where had a classic lunch of Indian thalis and did a bit of souvenir shopping. After work we went to the Shilparaman market where we did some more souvenir shopping from local vendors. Rao gave me a quick lesson in not accepting the initial price at our first stall and after that I did my own haggling. I bought souvenirs for various people and one small thing for myself (a fleur de lis necklace that reminded me of the logo of my alma mater, the University of Louisiana at Lafayette.) After this we turned in and readied ourselves for the big event the next day. 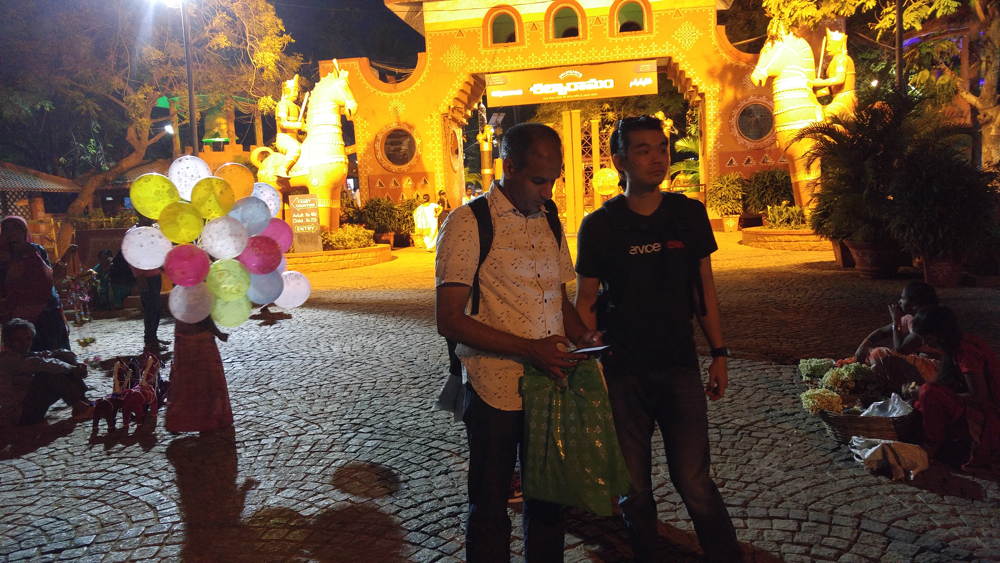 One detail that eased logistics for us was that the event space was also the hotel at which were staying. This reduced a lot of fear of failing to bring key elements when the room was a short elevator ride away. We got into the space nice and early to check out arrangements, verify we could connect to the projectors and all the small details that weighs down one’s mind when running such an event.B Although the event was advertised as starting at 10 AM with registration from 9:30 to 10 AM, a hard-core crowd was there by 8:30. I felt a little bad for them sitting there for all that time and talked to them a bit as I could while also getting the event ready. 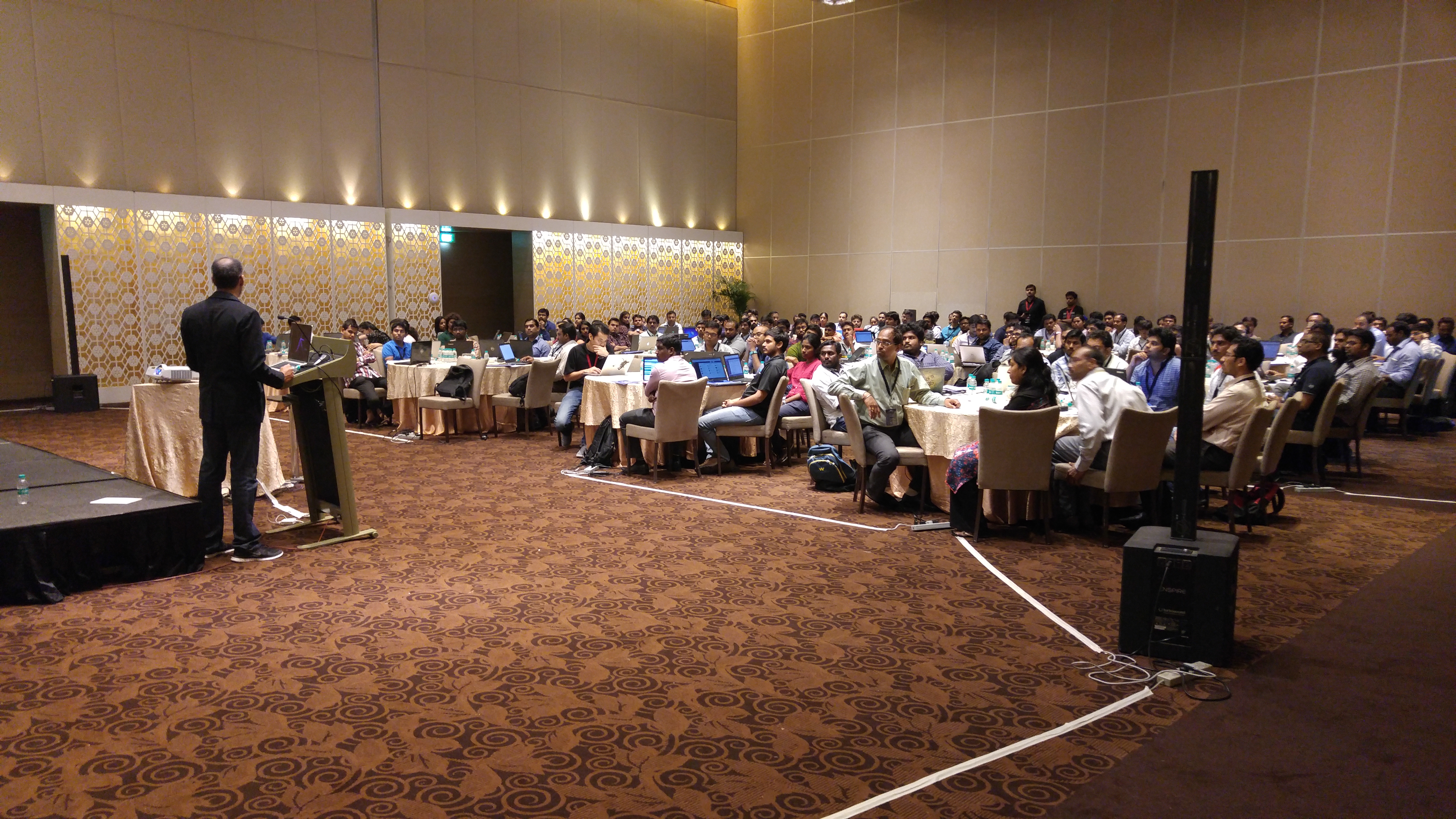 When showtime began, we had a nice healthy crowd that filled up the meeting space. Rao did the introduction and talked about the platform and our business, why we are interested specifically in India as a market and about the developer ecosystem. After that, it was time for the Application Development Workshop. This was prepared by fellow Developer Evangelist Jason McKee in an adaptation of some of the existing training courses available on the Developer Portal. The workshop was a satisfying experience for pretty much everyone. The course was designed to touch most of the areas of concern to a developer on the ServiceNow platform. It has a ramp that starts at the very beginning of creating an app and tables and increases in complexity over the 4 hours by adding business logic and eventually getting into Service Portal pages and widgets as well as external integrations. One of my personal fears was that we would get too many people too advanced for the material, and that they would be bored and have a negative experience. In practice that wasn’t a problem. Even the people who had previously created applications seemed to get value out of the course. I asked as many people as I could and not one person had the bad experience I feared. 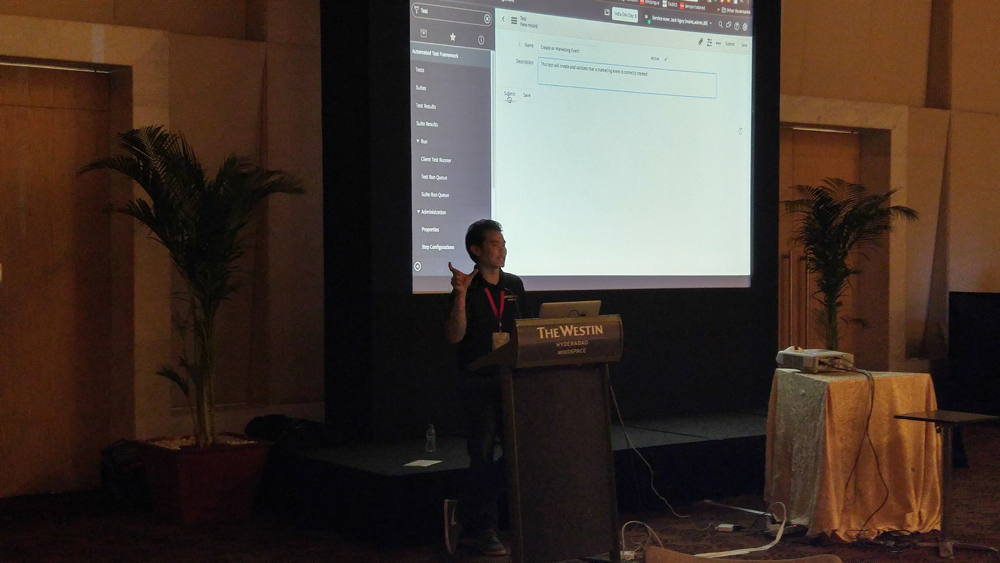 After a full morning and afternoon with the workshop, we transitioned into some more presentational material. Rao talked more about the ecosystem then Jack went into his Istanbul tools talk. It should be noted that unlike me, Jack does not have a job that requires staying current on these tools. Because he and his team work on instances that are below the Istanbul release, these presentations required a crash course in the tools because he doesn’t use them day to day. He gave a great presentation on the Automated Testing Framework with a solid demo that impressed the audience. After that he presented the Script Debugger and also impressed the crowd with that one.

After that I gave my Service Portal presentation. Although I had been through the material in preparation, I didn’t factor in that during the workshop almost all of the room had walked through the basic architecture of Pages and Widgets. I called some audibles and cut a lot of material on the fly to make it more reasonable for that audience. Rather than demonstrate the Widget Editor, I focussed on demos of some of the more advanced widgets I have built and discussed how to bring in third party Angular and JavaScript libraries to extend functionality. I had been warned to expect some reluctance of the crowds to speaking up with questions from the floor. In fact, we got a lot of question about all the content of the afternoon presentations. It was quite gratifying the high level of engagement of all the attendees at all of the events this week.

And with that, we ended the day portion of Developer Day Hyderabad. I will continue this travelogue with part 2, starting from the evening ServiceNow Developer Meetup in Hyderabad.

I hope you enjoy this recounting of our experience. If you attended one of these events, feel free to chime in with your experiences in the comment section of this or any of the posts in this series.