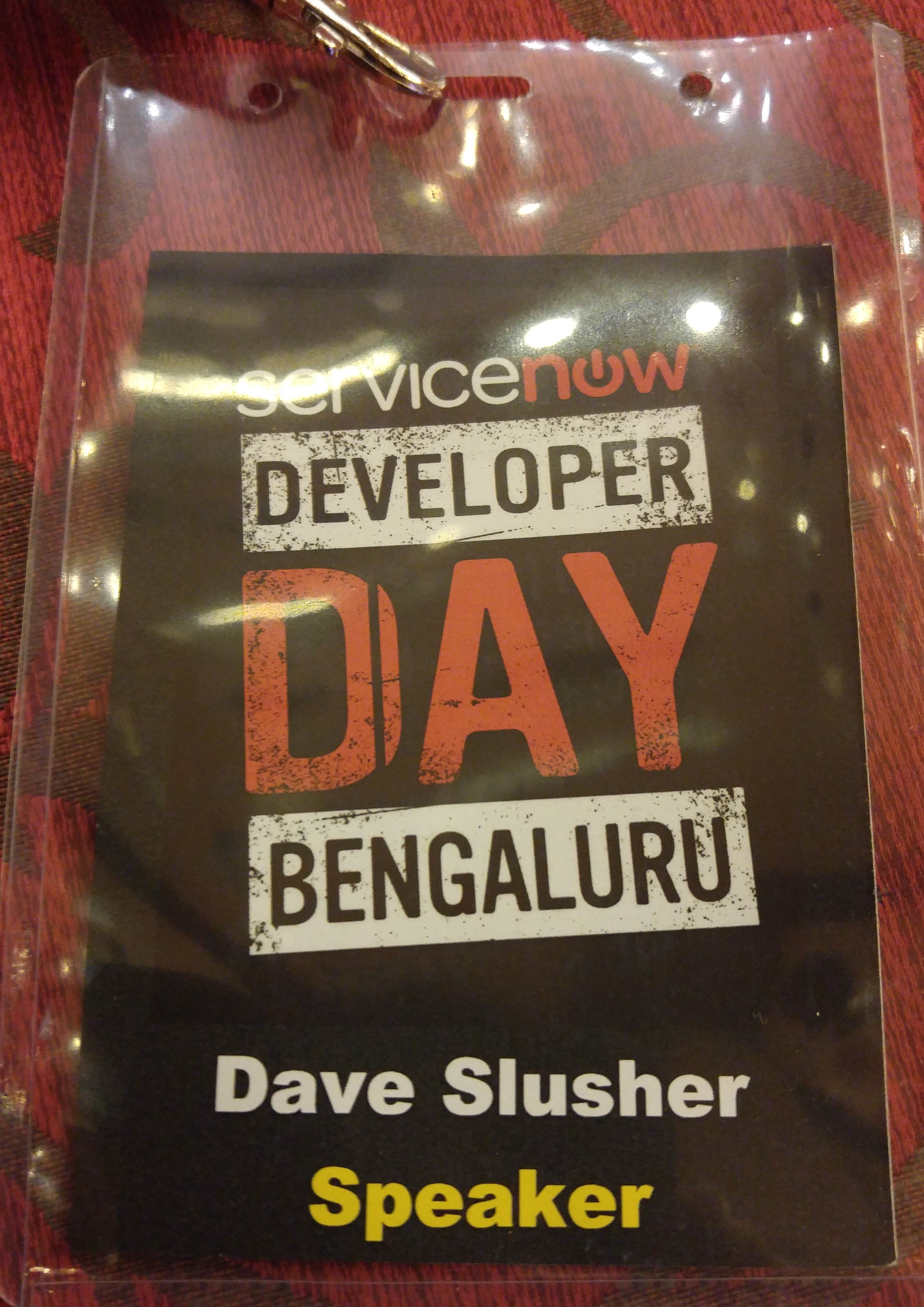 This is a continuation of the trip report of our trip to India for Developer Days. Part 1 is here.

After concluding the Hyderabad Developer Day event, we rolled right into the evening program. The reason for having a separate event in the evening was two-fold. It both allowed for us to serve the population of people who couldn’t take the whole day off work but also was intended to build an organization around an ongoing Hyderabad ServiceNow Developer Meetup. Much like all the other geographic developer meetups, we are looking for volunteers to organize periodic meetings as an ongoing effort.

We had about 30 developers turn out for the meeting. It seemed small but that was only by comparison to having spent all day in an event with over 100 developers in the same hotel ballroom. In absolute terms, 30 developers makes it one of the biggest evening Developer Meetups so far. Our program was similar material as our afternoon presentation during the Developer Day presented to a new audience. It was again well received and there appeared to be a positive reception to both this meetup and the idea of having an ongoing meeting. With any luck this will become a self-sustaining organization. If you are interested, you can sign up to the Hyderabad Meetup Group. After the end of the evening program, we did the logistical work to tear down the space and get in position to take the show on the road to Bengaluru. Jack, Rao and I were all traveling in the morning while the rest of the Hyderabad based team were flying in the afternoon. After a very early morning Uber ride to the airport, Rao went one way while Jack and I took a different flight. People seemed to be making light of us taking IndiGo rather than other alternative airlines but it was an extremely well-run and pleasant flight, I thought. It was a better experience than flying American Airlines from Myrtle Beach to Chicago.

Once we landed in Bengaluru and got through the airport, we found an Uber and started the trek to the hotel. The drive was 50 km but took us about 2 solid hours for the drive. Being the nerds that we are, Jack and I tethered to my phone and spent a large portion of the drive working on our laptops. This drive was really the one during which we experienced what I expected from the cliched notion of driving in India. I was amazed at all the cars driving so close to each other without any vehicle contacting another. As best I can tell, any driving move is fair game as long as you are honking the horn. 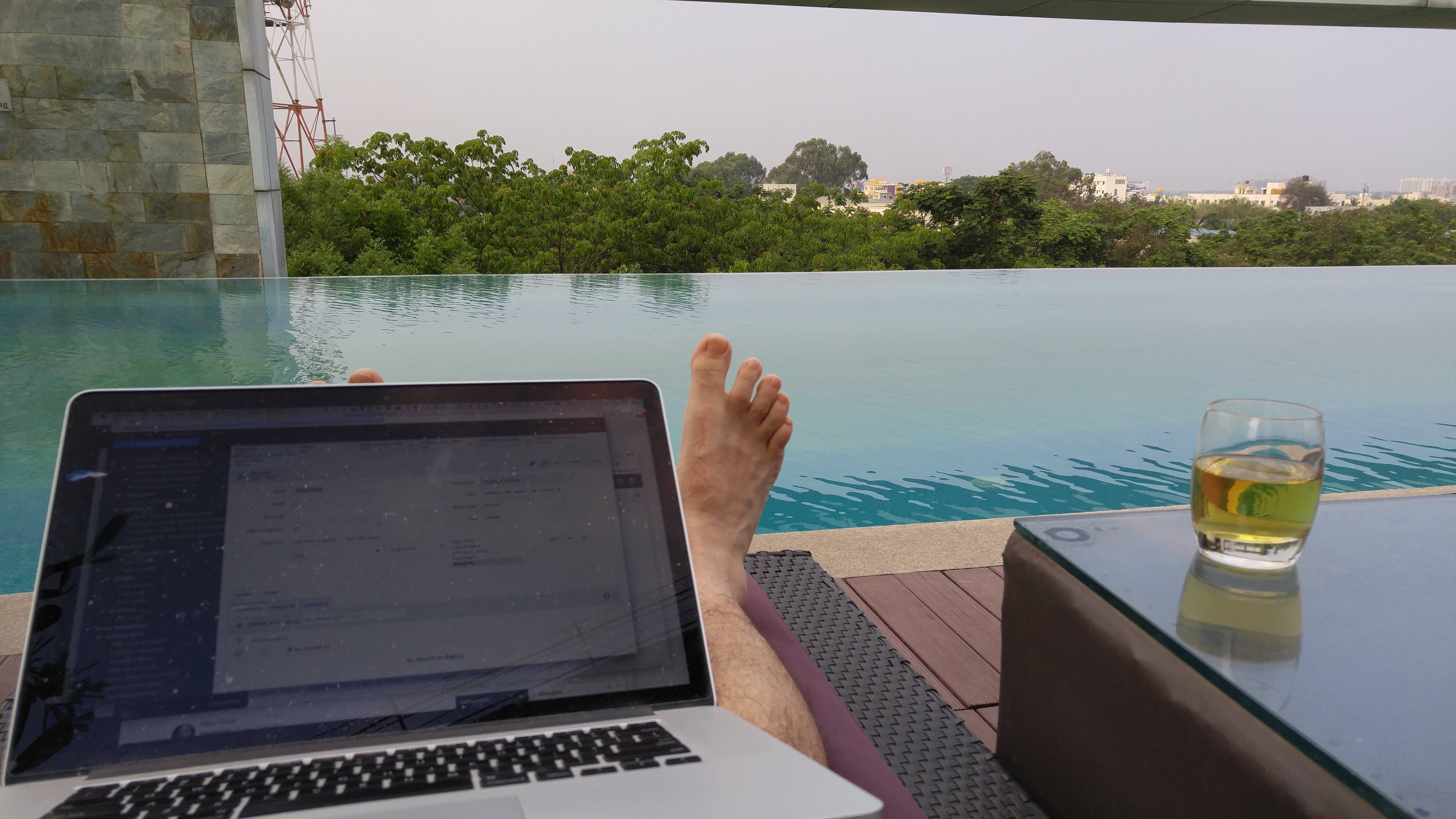 Once we got to the hotel, we prepared again to do the whole show over again in a new place. There was much less stress this time since we had already honed our presentations and been through the entire event once. I once again chose the hotel pool as my temporary office. Unlike the crowded pool at the Hyderabad Westin (early on a Sunday afternoon), I was pretty much the only guest at the Crowne Plaza pool late on a Wednesday afternoon. I got some application development work complete while sitting beside an infinity pool. That was certainly a pleasant environment for work. After this, Jack and I had a little dinner at the sports bar in the hotel then retired early to get ready for the event.

Once we began the preparation in the morning, it became clear that the Crowne Plaza Bengaluru is a serious venue for a business conference. Although it wasn’t as nice a hotel as the Westin in Hyderabad, every aspect of the meeting space was better. The staff was on top of it with the audio-visual setup and internet. We did have one hitch in that the VGA adapters didn’t work so we had to do a little kludging to get the rear projector working. Although there were 50% more attendees at this event, the internet never had even a small hiccup. It was a factor in Hyderabad, but in Bengaluru it wasn’t something that contributed to the day at all. We reprised our presentations and again ran through the Application Development Workshop. Again the crowd seemed to find value in it. Considering the large number of participants, the number of problems were very low. The audience as gratifyingly capable, even those people who had never previously developed applications on the ServiceNow platform.

As before, I made an effort to talk to as many people as possible both during the workshops and at all the breaks. I was surprised when I found a group that had travelled all the way from Delhi to Bengaluru to attend Developer Day. I wouldn’t have predicted this (that’s 1700 km or over 1000 miles!) When we polled the audience we found folks were there from Chennai, Pune and other various places around the country. This did make it clear that we have some demand around the country and suggested that future trips need to serve these populations as well.

After the workshop, we again ran through our afternoon presentations, Jack on Automated Testing Framework and the Script Debugger with me presenting Service Portal development. Again the crowd really seemed engaged and present for all the topics. We had been warned not to necessarily expect a lot of questions from the floor, but we actually did get a fair number of them. It was enough that we needed to get microphones and run around the space to make sure the audience could hear the questions. 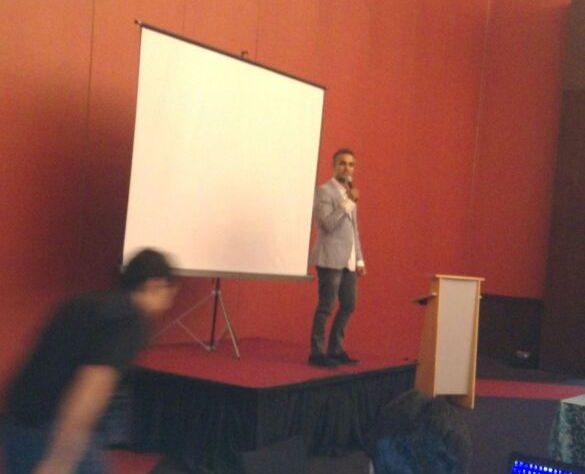 In Bengaluru we had something a little different on the agenda. As we transitioned out of the Developer Day portion and into the evening Developer Meetup we had entertainment in the form of comedy from Sanjay the IT Guy. Being the person addressing the crowd immediately before his act and not being a fool, I made sure to get myself as far to the back of the room as possible for his act. I figured out of sight, out of mind and that largely seemed to work. There was a lot of local humor that the crowd really enjoyed. Probably half of the jokes were too specific for me understand but I could tell from the reactions of the group that they were enjoying his jokes. He got a lot of laughs and some big applause at the end.

After Sanjay, we rolled into the Bengaluru ServiceNow Developer Meetup. Again, we had several dozen people with a small overlap from the people who had attended during the day. There were several attendees very committed to the idea of having the ongoing meet up and more than willing to volunteer to organize it. If you’d like to participate in this meetup, you can signup up at the official page for the Bengaluru Developer Meetup.

After the evening event was over, we once again tore down the space and prepared to return to our respective homes. The team from Hyderabad as well as Jack, Rao and myself had a victory dinner and celebrated a good pair of events. We joked and relaxed but also discussed the future of events like this and how we can get the teams based in India the tools they need to take the lead on future events. Before long, the weight of exhaustion began to bear down on all of us and we went our various ways to pack and prepare for our exits.

Rao had booked a 4 AM flight out of Kempegowda Airport. We briefly considered all riding together but then Jack and I decided we’d rather get a few more hours of sleep before our 7 AM flight. We rode the hotel shuttle back to the airport for a much more mellow ride in the middle of the night than the traffic filled affair arriving. After a calm breakfast and some more conversation, Jack and I boarded the plane. Because he was sitting closer to the front of the plane and had a very tight connection in Heathrow Airport, I said my goodbyes during the flight. I wouldn’t have bet cash money on him making the connection but luckily he did. I had a few hours to kill in Heathrow so I had some lunch then found a power outlet and worked for a while. Eventually I boarded my long flight from Heathrow to Dulles Airport in Washington DC. I had an odd itinerary that had me arriving in once DC area airport and flying out of the other. A friend of mine gave me a ride to my hotel near Ronald Reagan Airport, during which we stopped for dinner and more conversation. I arrived at the hotel, collapsed and woke up in just enough time for shower, breakfast and a shuttle ride to the airport. It pretty much all went off like clockwork. 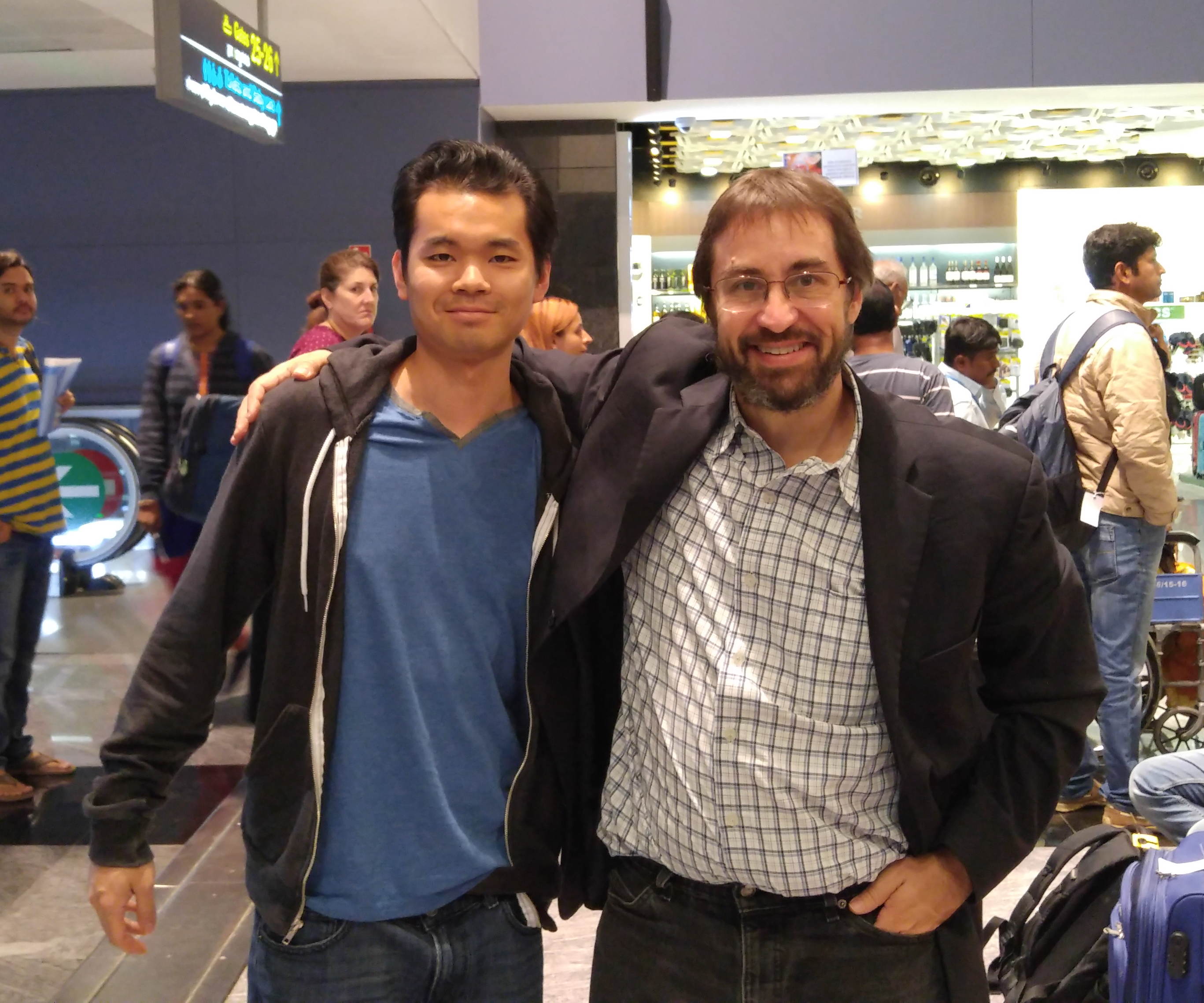 And with that, I was home eight days after I left. it was a good week of meeting with developers and coworkers based in India. Our whole team was very glad we went and pleased at the reception of all of the events. We made many new connections, and helped to build out some excitement and organization around the ServiceNow developer presence in India. This is just the first step, over time we expect to do much more to serve our constituents in India, but for now we are taking as a success what we were able to accomplish this trip.

Thanks to everyone who attended any of the events. It was great to meet as many of you as I did, and I hope to get to meet more of you in the future. You made a long hard trip more than worth the effort and I thank you for your positivity, engagement and kindness.