Six months after initial release, the ServiceNow Extensions for Visual Studio Code has reached version 1.4. This milestone is significant in that several incremental changes have added up an improved experience. I will include the release notes below and highlight several of the improvements directly. Continue to provide feedback on the idea portal and the dedicated community. Read the FAQ. Not everything I point out will be specifically new to 1.4 but instead is how all these improvements work together for an improved experience.

The command palette (Ctrl+Shift+P) and contextual menu (right-click) have quite a few additions and improvements to existing commands in this version. The contextual menu additions include handy things like Copy Sys_id and Open in Platform. Revert to instance version can come in handy when you need adjustments that should not get synced in your project.

The status bar along the bottom has been pruned to show the most relevant commands.

File search (my most common command), Sync Project, and Sync file have all been placed prominently in the status bar. Previously present command items are still available but through the command palette.

The comparison with server feature has improved, but from the contextual menu and when the server version has updated since you last synced. When that happens, the conflicting file interface allows you to open the differential and resolve/mark as resolved the conflict as appropriate.

The final improvement to the status bar leads nicely into the next section, which is selecting global update sets when on a global application file.

Great strides have been made to improve the experience when dealing with global files in your project. The file search has been flattened and prioritized to present the most common application files. Once those files are selected and brought into your project scratch space, working with them is more intuitive and useful. When syncing a project that contains global files that have been modified locally will present a new screen to interact as below. 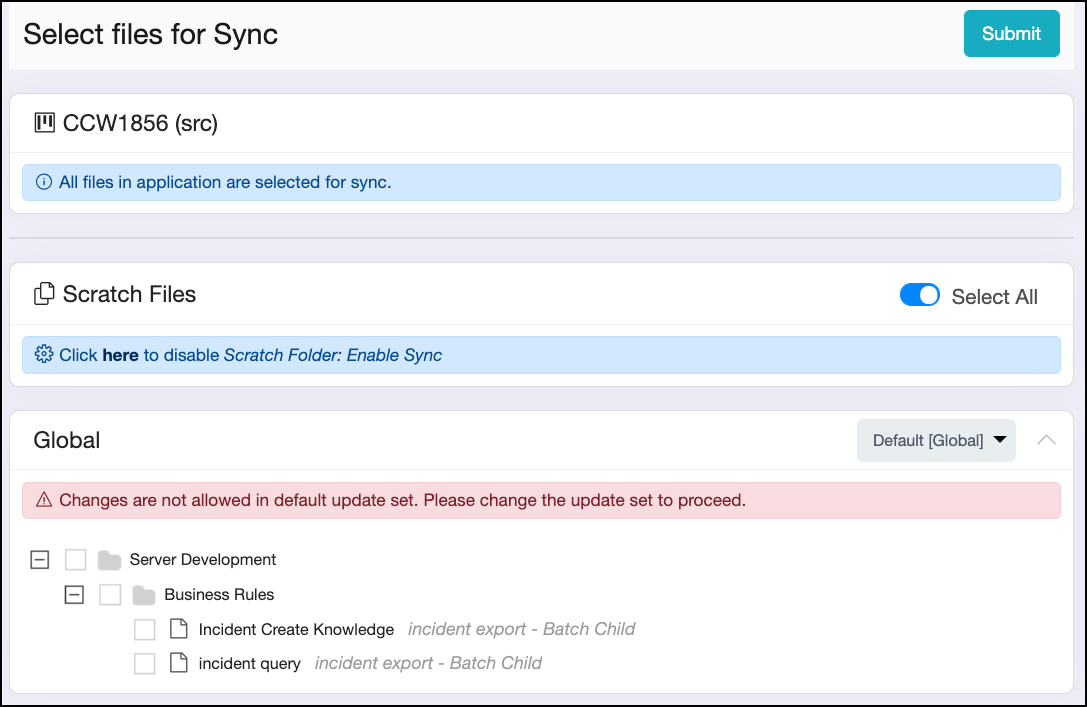 You can see in the image above that you can select which of the global files you wish to include in your sync. Additionally, you can toggle the scratch space off entirely for the current project. Before you select which global files to include, you need to set the global scope update set that your application files will be updated too. That process is necessary because your global scoped file updates can’t be placed into your application scope’s update sets.